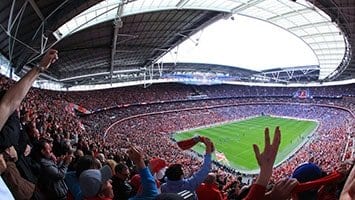 The FA Cup Final is taking place Saturday 21st May between Crystal Palace and Manchester United. The two teams have met in the FA Cup Final before back in 1990, with United taking the win. 26 years later, millions of pounds spent, and a whole new Wembley, the Premier League sides come face to face once again.

But will Palace’s class of ’90 inspire another win? Let’s take a look.

Manchester United’s Route to the Final

United began their Cup campaign with an unconvincing win over Sheffield United before seeing out Championship side Derby and League One side Shrewsbury Town. Louis van Gaal’s side struggled against an in-form West Ham side but took the win at Upton Park. Eventually, they secured their place at the final by beating Everton, thanks to an Anthony Martial goal.

Crystal Palace’s Route to the Final

Palace booked their place in the FA Cup Final through a more challenging route. The Eagles managed to get past Southampton, Stoke, Spurs, Reading and a strong Watford side. Crystal Palace struggled during the second half of the Premier League season but put on an impressive display in their FA Cup games.

What’s at Stake for the Sides?

Alan Pardew will be looking to redeem his season with FA Cup glory while Louis van Gaal will be hoping to finish a frustrating season with some Silverware, and hope it’s enough for him to keep hold of his job. The Dutchman has failed to win any recognised trophies since his appointment and the fans want him out. He will be looking to hit Crystal Palace with full force and win back at least some of his doubters. United have not won the FA Cup for 11 years and that’s too long a time for a club that use to dominate world football.

Crystal Palace finished the season in 16th place after a promising start, while United missed out on the final Champions League spot with a fifth-place finish. Crystal Palace held United to a 0-0 draw at Selhurst Park earlier in the season but took a 2-0 beating at Old Trafford.

What Palace Must Do

It will be a tough test for both teams. Alan Pardew has the experience of being in this position before. He has done wonders with Palace despite lacking an out-and-out striker. He will be looking to break down the United defence and nick a goal. Crystal Palace struggle to score a lot of goals, but they are capable of putting themselves in the lead against a leaky United side. The Eagles will be looking to frustrate the United defence using ex-United winger Wilfried Zaha to get the ball in the box, hoping Dwight Gayle or someone gets on the end of it. Gayle is the top goal scorer for Palace this season with 7 goals followed by Yannick Bolasie and Yohan Cabaye on 6 goals. United’s Anthony Martial is sitting on 15 goals for the season.

What United Must Do

Louis van Gaal has the stronger side, with most of United’s best work coming from David de Gea. The keeper has been outstanding this season and has prevented United from an embarrassing finish this Premier League campaign. United have plenty of goal scorers, so Alan Pardew’s biggest worry will be keeping Anthony Martial and Marcus Rashford from running rampant early on and putting United ahead. An early goal for United will most certainly spell the end for Crystal Palace FA Cup hopes.

Who’ll Come Out on Top?

I can’t see Manchester United losing this game. They are in desperate need for a boost and have the stronger side. Martial will be looking to get on the scoresheet at Wembley and I really think he will. Alan Pardew has his work cut out for him and will need to devise a plan to stop the free-scoring Frenchman from putting United in the lead. I can’t see Palace overturning any deficit, they need to get the first goal if they have any hope of winning and then they have to keep hold of the lead. I just can’t see it happening. I believe it will be an easy win for Manchester United.

Do you think you know which side lift the FA Cup this season? Maybe you’ve got an inkling about who’ll score the winning goal. Whatever bet you want to place on the final this year, check out our list of the best UK bookies for football bets.